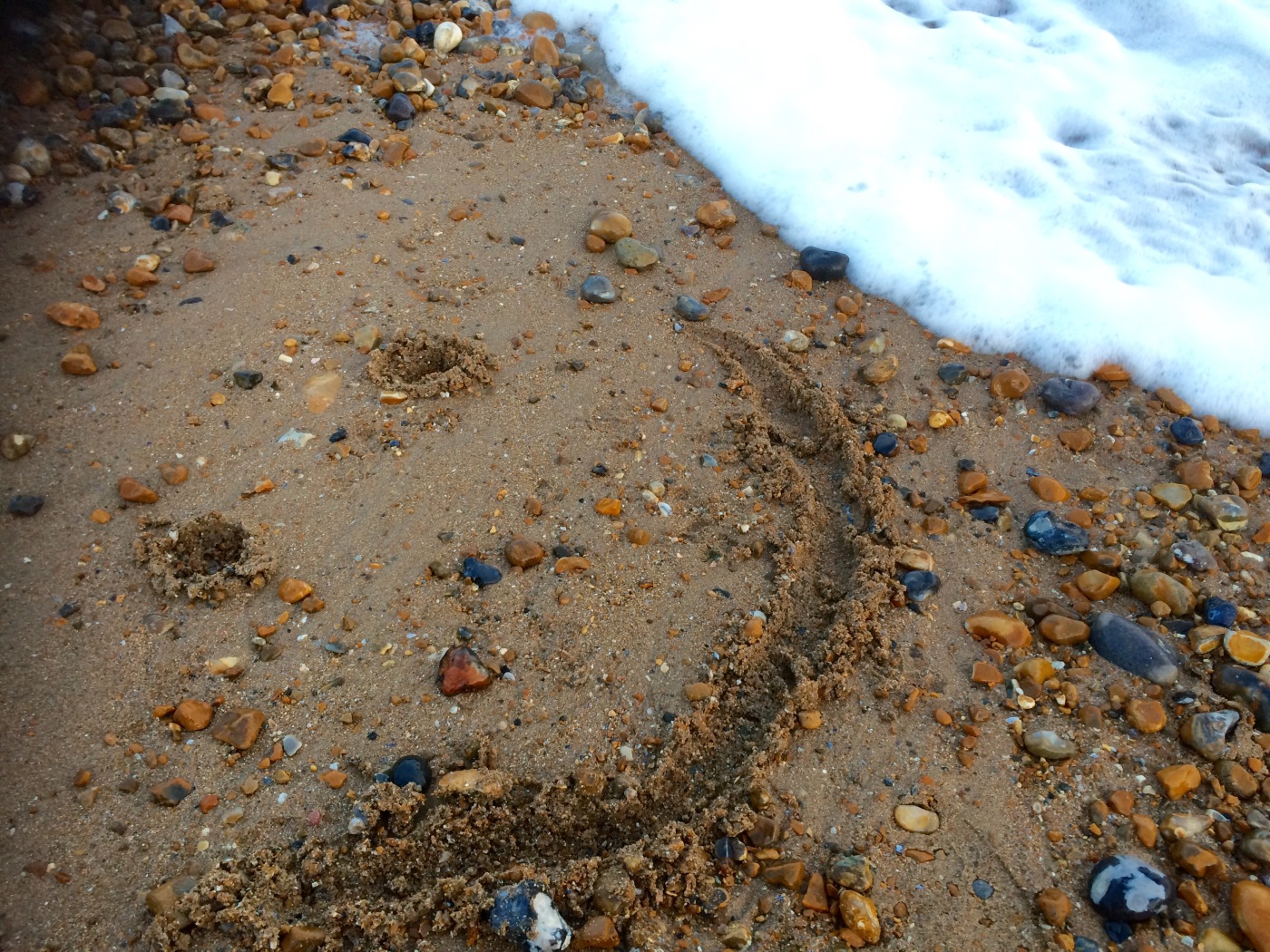 -I drew this smiley face in the sand on Eastbourne beach with my old school friends. The oncoming tide made me feel a nip of melancholy that the sea was about to wash away the childish image.-

He came to me, running and rolling his head like a mad thing. Water spat from his hair into my eyes as I stumbled backwards over the sliding pebbles.

His head banged into my chest. We were ten so the height difference was in my favour. His wet, gritty face shook about, wetting and dirtying my sun top and neck. I laughed, hating him.

Ryan grinned at me, his chin and cheeks red from where the sand had also scraped at him.

“Now your hand,” he snatched at my left.

“Never,” I turned and ran towards Eastbourne. I could always outrun him, in all our years of primary school.

He started overtaking me in Secondary school. Thanks to football. I took my friend Sharon whenever he was in a match. It was hard to tell whether she matched her lipstick to her football shirt or vice versa. Sports Direct was her idea of a shopping centre. Even her make-up brand was called Miss Sporty.

Sharon played a lot of netball. She and Ryan and the football guys loved winning. We would go over to their houses after the match and it’s all they would talk about. Who won. Who cheated. What was unfair.

I liked running. I didn’t care if I was last or broke the world record. So long as my limbs were pumping, I was happy.

Sharon said that everything was a competition. We were waiting in Ryan’s room while he showered after a match and she was cutting her nails. She had let them get too long and one had bent back during netball and really hurt her.

“Not everything,” I said.

She nodded fervently over her splayed fingers.

The door banged open and Ryan came running at me, head rolling like a mad thing.

“No! Shit!” I fell back, but he pushed his face into my chest and ruffled around before I could curl up. He resurfaced, laughing at the wet channel down my white top.

“RyyyyyyAAAAANNNNN,” he put on a squeaky voice and grabbed a t-shirt.

“Keep doing that and your towel is going to fall off one of these days,” Sharon said as his blonde head popped through the t-shirt neck.

“You wish,” he pinched her knee. She kicked him off and smiled.

“Ouch, look what you’ve done,” I pulled my top so he could see my red skin.

“Oops, sorry I forgot I hadn’t shaved,” he rubbed his cheeks.

“She’s just trying to get you to look at her boobs,” Sharon winked at me and Ryan grinned.

He looked around for some boxers and trousers. Sharon got up and helped him because he couldn’t find any.

My chest was red, but his cheeks weren’t red at all. There were small, gold shoots around his mouth and up his cheeks. He didn’t need sand anymore.

He asked Sharon out just before we went to uni. They spent the holidays together and, when they were home, I joined them. It wasn’t too different, just a lot more knee-pinching and smiles and they would cuddle when we watched a film. I visited Sharon and helped her buy new dresses for her dates with him. I was always more of a dress-wearer than her. Sometimes she would wear his football shirts to bed. Her lipstick still matched.

Ryan found it harder to visit me. I was in Reading University while he was in Southampton so it was a much farther way to travel than to Sharon in London. Still, I wanted to introduce him to my running buddies and housemates, and to try out the SU with him.

When we were back for the summer he invited me to watch him play with his old football buddies. Sharon had started her summer job in Sports Direct so she couldn’t come along. He came back from his shower when I asked him to visit.

“Tell you what, I’ll see when Sharon’s free and we’ll come up in the Autumn term.”

“Sharon has already seen it. Why don’t you just come?”

“It’d be fun the three of us together, right?” he threw the towel on me. I pushed it off and looked at him.

“Why don’t you want to come and see me?”

He passed his towel between his hands a couple of times, “I don’t think Sharon would really get me coming to see you on my own.”

“What, so now you’re not allowed to visit me? Because you and her are going out?”

“I think it’s just that you’re a girl and we’ll both be in the same room… you know.”

“She should trust you and we…”

“I was friends with you way before she came along.”

He sighed and sat next to me on the bed.

“I know,” he nudged me with his knee, “you’re still my best friend. It’s just that I’ve got her now too.”

“I’m not going anywhere. We cool?”

“Ok. You know,” he turns to me, grinning, “you’ll always be my face-cleaner.”

He jumped on me and buried his face in my chest, shaking it from side to side, his stubble scraping and scratching at my skin. But it hurt more than usual, bringing tears to my eyes. Sand never hurt like that.

I watched him lift his face, grinning and blue-eyed. I knew that the next words I had to say, for the first time, were ‘don’t do that.’ Because it’s what he had always done. Because he wouldn’t do it if Sharon was here. Because he was not a man. Just a boy with a sandy face.

This is a text widget, which allows you to add text or HTML to your sidebar. You can use them to display text, links, images, HTML, or a combination of these. Edit them in the Widget section of the Customizer.