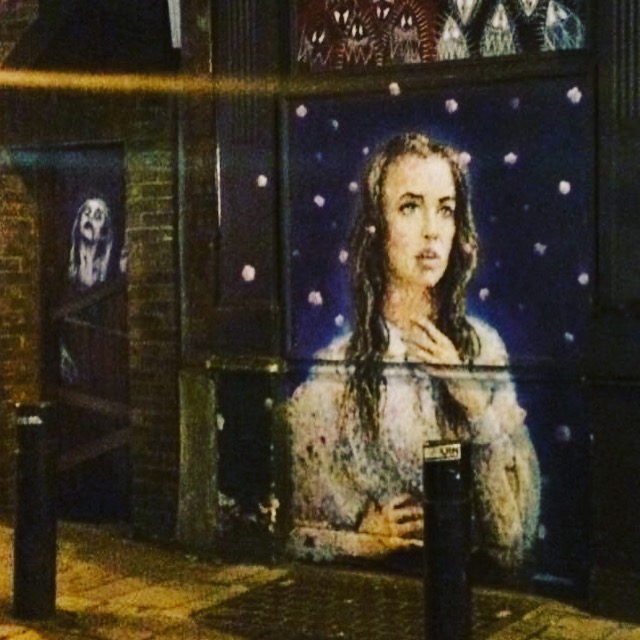 –This mural of Mary Kelly, depicting her as the person she was before she became known as the final victim of Jack the Ripper, gives me so much respect for the artist, whoever they are.–

London is glossy and black under fallen rain. Orange globes, cast by over-hanging lampposts, shine on the slippery pavements. The metal gates of Spitalfields Market are tucked to the sides, leaving a dark space into the market-hall.

Inside, the muffled music from the surrounding bars does not penetrate quite to the centre. Skeletons of market stalls sit at odd angles, their chipped wooden tops and anorexic frames exposed and stripped of materialism. A damp huddle of people walks into the midst of the tables, anonymized under umbrellas and hoods.

A tour guide, young and smiling, trots to the front of the group, carrying a rucksack in one hand and a large yellow umbrella in the other. She keeps the umbrella over her head, despite the cover provided by the market-hall.

Four members of the crowd come forward, taking down two small wet umbrellas. Alice, Rob, Zaleha and Hugh, all in their early twenties, settle in front of the tour guide and wait as the rest of the people join them. Zaleha is the smallest, wearing a tiny pair of converses. Alice has short, brown hair, which she spikes up with lots of gel. Rob is tall and skinny under his long black overcoat. Hugh is the only one not wearing an ounce of black.

“Ok guys,” the tour guide bobs her shoulders, “we’ve come to our final stop. I hope you’ve enjoyed learning about Jack the Ripper with me. Remember, monsters are a part of our history too. Just like the vampire and the werewolf, we have Jack the Ripper.”

Rob leans over and pants in Alice’s ear. She pretends to slit his throat with her finger, right to left and back.

“As promised,” she turns and lays out a series of laminated sheets of paper on a nearby stall, “I have the pictures and original sketches of each Jack the Ripper victim, going left to right…”

“Shouldn’t it go right to left?” Zaleha mimes across her throat. The boys smile. Alice hides her giggling behind a small hand.

“Going left to right. Take a look if you are interested. I don’t like to show them during the tour,” the tour guide steps away and gestures for people to look, “please come and ask me any questions, about the tour or getting home, and please do tip as they make up most of my pay.”

The crowd veers towards the pictures. After tipping the tour guide a fiver each, Alice and Zaleha make their way up to the far left sheet. Rob and Hugh push to see the final sheet.

“Shiiiiiiiiit,” Zaleha breathes, pointing at the cut-lines on the second set of photographs, “poor woman.”

“These two were forty,” Hugh whispers.

“I didn’t realise they were that old,” Alice peers over.

“The last victim wasn’t,” Rob reads, “she was twenty five.”

“Twenty five? That’s my age…” Alice edges along the table to see the later victims. She freezes when her eyes settle on the paper.

The final sheet shows Mary Jane Kelly’s faceless, clotheless body arranged on her bed. The room is dark, and spattered. The legs and neck and arms are human, but held together by something unrecognisable. A tangle of entrails, which have somehow had their humanity cut out of them.

Alice stares at the picture, motionless within the crowd. Her eyes flit across the featurless mush that is Mary’s face, her own lips squeezing together, feeling each other’s form.

Long, thick hair gently falls around Mary’s face. Alice shivers, looking at how the sides are still pulled up into a clasp around the faceless head.

“It’s a picture,” Hugh says when she strokes the hair with her finger.

“She probably tied it up herself that evening before she went out,” Alice says, quietly.

Later that night in The Ten Bells pub in Shoreditch, London. Alice, Rob, Zaleha and Hugh sit around a high, but small round table. The pub is very crowded, with a thick crust of people bustling around the bar in the middle. The lamps are low and cast a yellow light across everything, shining on the old blue and white wall tiles.

The boys hold a ‘Jack the Ripper Walking Tour’ pamphlet, while Zaleha pushes their pints around the table to avoid their jabbing elbows. Alice frowns up at a blackboard, which shows the list of available cocktails.

“Was one of the Jack the Ripper’s victims called Mary?” she asks.

“Then they should not sell Bloody Marys here!”

The two men exchange a glance and take long-enduring sips of their pints. Zaleha, whose converses dangle from the stool she is sitting on, leans forward on the table.

“So long as they don’t contain any gin, they’re ok.”

“What, because she contained gin?” Alice grins.

“A lot of gin,” Rob buttons and unbuttons his coat, “six litres, if you believe the tour guide.”

“Six litres!” Alice’s eyes widen, “how was she not dead?”

“She was,” everyone else says.

Alice’s mouth drops open as if she is about to defend herself, but settles for a sheepish smile.

“It is bad taste, though,” she takes a sip of her pint, “to sell Bloody Marys here when it is famous for Jack the Ripper.”

“Jack the Ripper didn’t come here, it was his first victim, Polly what’s-her-name who was last seen leaving this pub,” Rob says.

“I know, just I think the name has a horrible feel to it here.”

“I think you’re over-thinking it,” Hugh rolls his eyes.

“Sheesh, Alice, it was like a hundred years ago. What happened to the girl who’s always dragging us to go see Paranormal Activity?” Rob reaches across the table and grasps her arm. “They are all dead now anyway. It’s not like they’re still dying.”

“They are,” she mutters, still watching the blackboard, “every time someone looks at the pictures of them.”

“Anyone else regretting we ever did this?” Hugh drains the last of his pint, “quit being a downer, Alice.”

“I don’t have a problem with it,” Zaleha shrugs, “it’s educational.”

“I’m sorry,” Alice sighs, pressing her lips together briefly, “I just… that picture of Mary. I was trying to see what she looked like. Her face.”

“Will it make you feel better if I find a picture of her before she died,” Rob takes his iPhone, “what was her last name?”

Hugh and Zaleha shrug, while Alice shakes her head.

“Have you found any?” Alice sits up.

“Um, wait…” he scrolls down, “just getting past the gory ones.”

The three sip their drinks while he scrolls down. With each thumb roll to the top of the screen and descent back to the bottom to scroll again, the faces on all three become slightly less happy.

“Ah… no wait that’s not really her…” Rob keeps scrolling, “this is bloody frustrating.”

Something about that word turns each of Zaleha, Alice and Hugh’s heads towards the blackboard. Above their heads, in drooling red letters that can be seen from every angle around the pub, shine the words Bloody Mary.

This is a text widget, which allows you to add text or HTML to your sidebar. You can use them to display text, links, images, HTML, or a combination of these. Edit them in the Widget section of the Customizer.